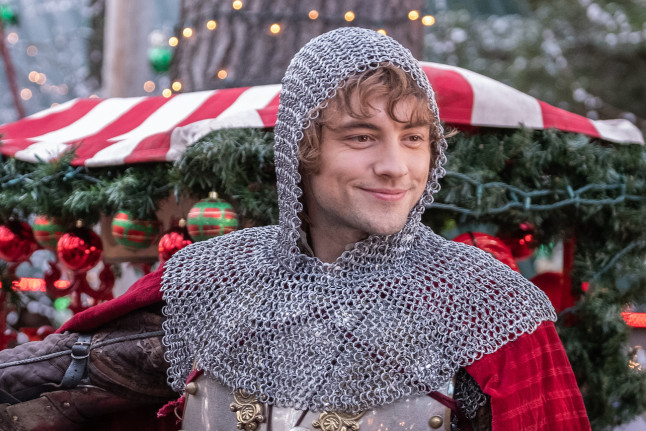 It’s that time of year again! Time for me to spend one hour and thirty-three minutes repeatedly mainlining the most ridiculous, low budget content put on film. And Netflix’s The Knight Before Christmas is on another level.

In the movie, a knight time travels from the late 1300s to 2019 to fulfill a quest given to him by an old crone he encountered in the forest. Oh, and he’s got to complete it before Christmas or else he’ll die or something I don’t really know. His love interest is cutie patootie Brooke, played by the film’s producer, Vanessa Hudgens, who has the most amazing wardrobe. Honestly, the costume designer deserves an Oscar for the coats alone. Brooke is super bummed her cheatin’ boyfriend found someone new for the holidays. Or something.

This movie packs the most half-assed world building into 1.5 hours that needed three just to crack the surface of the time shift. My friend made an excellent estimation that the title was created before the movie, then they retrofitted a script to it. And yes, Netflix churns out these minimally produced movies because they know people (like me) will watch them, but couldn’t they have done a quick Google search to make sure some of the historical context was accurate? Nah. This is about finding true love in 72 hours.

Our story begins in 1390-something with our handsome Heath-Ledger-in- Knight’s-Tale-knockoff, Sir Cole. He meets the crone, and she sends him to the future, where Brooke almost hits him with her car. As an act of generosity, she takes this man she believes is suffering from TBI-related amnesia to her home. The fact that he’s wearing armor, a sword, and chain mail is of little concern.

Cole, who traveled over 600 years into the future, is encountering things he’s never seen before. And Brooke, a teacher, must help him navigate the world. Things Sir Cole is surprised by:

Things Sir Cole is not surprised by:

Hoo boy. He’s unfazed by pretty much everything. He’s talking to an Alexa, a device we didn’t have until the year of our Lord 2014, with zero curiosity about how it works. There are people born in this century who wouldn’t know how to operate it. He’s essentially Chad in that SNL sketch when confronted with something that should be mind-boggling and beyond all comprehension.

As a writer, I do a lot of research, just to be sure something I referenced is correct. For example, the JFK airport does not have a Cinnabon. This is a thing I know because I checked. There were a ton of anachronisms we wondered about as we watched that I cleared up with a couple taps on my magic keyboard:

People of Netflix. Google is free. Hire me and I’ll type whatever words you want into a search bar.

As many of these movies go, there is barely a plot. If you squint hard enough, you might find one in this movie. One thing that’s missing almost entirely? A character arc. Brooke’s arc is a flat line. She’s a kind, poised, put-together teacher at the beginning of the movie, and she’s a kind, poised put-together teacher at the end of the movie–except now she’s met a dude and discovered the meaning of love or whatever. Does she have to overcome anything, aside from believing he’s a time traveler and not some LARPing weirdo she hit with her car? Not really.

His whole thing was to fall in love. That’s it. That’s the quest. And he did it in record time, a whopping four days. He was so enthralled with Brooke and her little Christmas wonderland–where approximately 42 people live and can always be found in the town square or just off camera–he didn’t have time to contemplate WHAT THE HELL WAS GOING ON AROUND HIM. Why he wasn’t running into the woods to have a panic attack and a long cry is beyond me.

There are also no antagonists. There’s really no friction of any kind. No real stakes either. If he completes his quest, I guess he just goes back to his time? And if he doesn’t he… doesn’t? They tried to shoehorn in an antagonist, a spicy red head who was in exactly two scenes. In scene two, she tries to put the moves on our hero, offering mistletoe, because everyone knows mistletoe = mandatory kissing. He’s like, “No thanks, I’m kinda into someone else”, and she’s like, “Okay, no prob.” Tension over.

There are plenty of “Remember this character?” moments where you’d maybe forget someone existed or the camera would pan to a seemingly unimportant character, then suddenly they’d appear in the scene and have something urgent and important to tell our heroes. The precocious student and the sad dad are two examples of characters that just kind of show up whenever they need some filler. I guess we’re supposed to care about them? I don’t know. Secondary characters matter, you guys.

The language barriers alone between these two would be astonishing. Aside from him NEVER hearing an American accent before, they would use different vocabulary, not just that “wench” was an inappropriate thing to scream at a woman in a diner. It may even sound as if he was speaking a foreign language to her, and this would be especially true for him. It goes beyond a few idioms to the sounds words and letters make. But my dude was REAL good at picking up a bizarre American accent to use our modern phrases.

The first thing Brooke feeds him is a diner cheeseburger and fries. This poor man would be incredibly sick from eating processed food. The water alone would rip his insides apart. I can’t stop thinking about the stomach cramps he’d endure. Good thing we have indoor plumbing. Of course, we all know handsome knights don’t use the bathroom, that would be gross.

The one (1) police officer suggested our knight “join the force” after he literally tackled a teenage boy to the ground and I think would’ve stabbed him to death with his sword if no one had intervened. Couple things. There’s a good bit of testing and paperwork involved in joining a police force. He’d also need, you know, a permanent address and a social security number. Details, details.

Finally, and most critically, she let him drive her car. Alone. Let me repeat that. She let a man, who she’d known for four days and wasn’t sure was entirely stable, drive her car. Now. We’ve all grown up in cars. We played with them when we were children. We watched and observed long enough to understand that the key starts the engine and you press the brake when you want to stop. So, when we started driving, we had absorbed so much of this through osmosis we already understood half the process. This man has no concept of a car, but he has the unearned confidence to take it out for a spin. And she lets him. By the time she finds him, it’s dark like he’s been gone the entire day. She only found him because the one (1) police officer of the town gave her a ring and told her that her car had been abandoned on the side of the street. Instead of being upset and concerned, she’s all like LOL, you silly goose. Girl. What are you doing?

Time travel is heckin’ tricky. There’s a lot about it that doesn’t make sense. I have time shifts in one of my novels, and it’s difficult to manage without establishing a TON of rules. It takes strong world building for someone to relax into the story and suspend disbelief. This… did not do that. Maybe if they didn’t set up his background so we, the viewer, could be surprised that this guy was truly a knight and not someone cosplaying one, then it may have been more convincing.

The enormous time shift would be almost impossible for him to grasp. It’s just too big. Imagine going back to your childhood and showing yourself a cell phone. The technology we take for granted now wouldn’t even make sense to you. The world didn’t look the same twenty years ago and it won’t look the same twenty years from now. Time is a construct, and I have to stop thinking about it because it makes my head hurt.

In conclusion, did this movie have every juicy trope I love? Yes. Did I enjoy it? Yes. Would I watch it again? Also yes.

It’s a mess. Watch it. And if you want a fun spin on all the ridiculous things we all love about these movies, check out my novella, The 24th!